BMG LABTECH is a leading global manufacturer of
innovative, high-quality, and reliable microplate reader
instrumentations and offers a wide range of microplate
readers and accessories for use in life science, drug
discovery, and other research areas 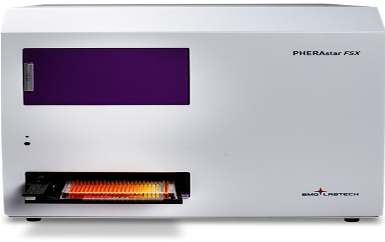 A multi-mode microplate reader is a piece of lab equipment capable of detecting with different
technologies the light photons emitted by samples of different nature and quantify them.

A Luminescence microplate reader, also named as luminometer, is a piece of equipment capable
of detecting the light photons emitted by chemical, bio-chemical or enzymatic reactions and
quantify them.

A luminometer able to measure samples present in a microplate is usually referred to as a
luminescence plate reader.

A fluorescence plate reader, also called spectrofluorometer or fluorometer, is a piece of equipment
capable of detecting and quantifying the light photons emitted by a fluorescent sample present in
a microplate upon excitation with light at a specific wavelength.

A nephelometer is an instrument dedicated to the measurement of the turbidity or cloudiness of
a sample. Turbidity is usually caused by the presence of insoluble particles suspended in a liquid
or gas. A nephelometer is used to measure light scattering (light reflected off the particles in a
sample), not the attenuation of light (absorbance) caused by turbidity.

Next generation Thermo Scientific™ NanoDrop™ One
microvolume spectrophotometers are pushing the
boundaries once again with the Thermo Scientific™
Acclaro™ Sample Intelligence technology that helps you
understand the quality of your sample before you use it
in downstream applications, bringing you one step
closer to success. Stand-alone instrument with local
control and Built-in touch screen Auto-blank and automeasure option. 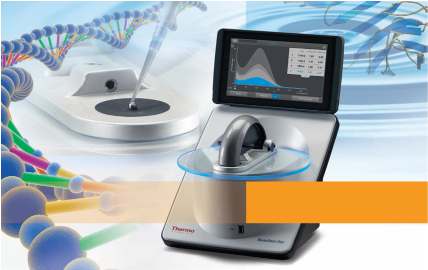 Full spectrum microvolume UV-Vis spectrophotometer
measure bsorbance from 190 – 850 nm. 8 pedestal array
for measurements of up to 8 samples in 20 second.
Autoranging pedestal pathlengths for measuring
undiluted samples. Acclaro Sample Intelligence
technology gives customers. confidence in their sample
by running blank assessment, warning when purity ratio
is out of tolerance, and identifying sample contaminants
dsDNA, RNA, and Protein A280. Differentiates between
mammalian dsDNA and RNA within the dsDNA and
RNA applications 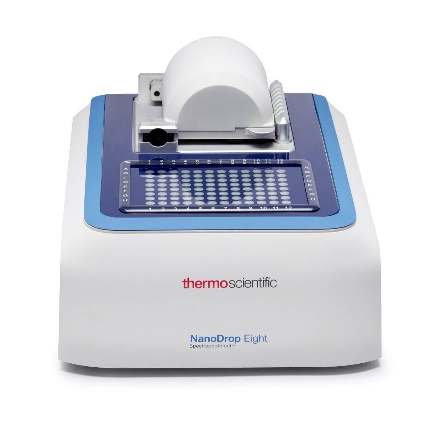 ÄKTA™ pure is a flexible and intuitive
chromatography system (Fig 1) for fast
purification of proteins, peptides, and nucleic
acids from microgram levels to tens of grams of
target product. ÄKTA™ pure is a reliable system
where hardware and UNICORN™ software are
designed to work together with columns and
chromatography resins to meet purification
challenges. 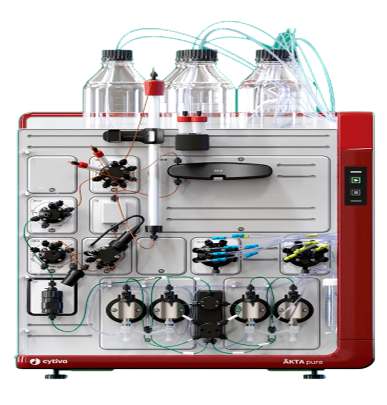